You are here: Home / softball injuries 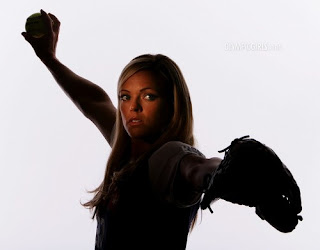 Contrary to common belief, softball pitching subjects the biceps to high forces and torques when the playerâ€™s arm swings around to release the ball, according to an analysis of muscle firing patterns conducted at Rush University Medical Center.

Published in the current issue of the American Journal of Sports Medicine, the study of the â€œwindmillâ€ pitching motion appears to explain the high incidence of anterior shoulder pain seen in female softball players.

â€œThe conventional belief has been that the underhand throwing motion of softball places little stress on the arm,â€ said Dr. Nikhil Verma, lead author and a specialist in sports medicine at Rush. â€œBut that is not the case.â€

In the study, seven women â€“ three collegiate and four professional pitchers â€“ underwent motion analysis and surface electromyography to evaluate the muscle firing pattern of their biceps in the course of a windmill pitch. Electromyography detects electrical potential generated by muscle cells when they contract.

The researchers found that even though the upper arm movement in both baseball and fast-pitch softball gives the ball about the same velocity, muscle force during the windmill pitch was much higher.

Moreover, the maximum force, or maximum contraction, occurred not when the arm was cocked, as in baseballâ€™s overhand pitching, but when the arm circled around from the nine oâ€™clock position, almost fully extended back, to the 6 oâ€™clock position, perpendicular with the ground, completing its windmill motion to release the ball. Consequently, the biceps took the majority of the stress, not the elbow.

â€œThe greatest impact is on the biceps, as the muscle first accelerates the arm and then puts on the brakes, after transferring force to the ball,â€ Verma said.

Fast-pitch softball is one of the most popular female athlete team sports in America. In 2008, roughly 2.5 million adolescents competed in the game, and about 1.3 million players were registered with the Amateur Softball Association.

Despite the gameâ€™s immense popularity at the high school and collegiate levels, Verma said, there is a dearth of sports medicine research on the gameâ€™s most notable activity: the windmill pitch. Many have assumed that injury is rare with the underhand throw.

Verma launched his study in Rushâ€™s human motion laboratory when he found that female softball players from the local professional team were coming into his practice complaining of pain in the front of their shoulders. He was able to localize the pain to the biceps tendon. In one case, a pitcher had ruptured her tendon during play, which implicated the long head of the biceps tendon as the source of stress.

The study findings correlated with these clinical observations.

According to Verma, female softball pitchers are prone to overuse injury not only because of windmill pitching dynamics, but also because they pitch so many games.

â€œCompetitive female pgitchers often pitch in every game during a weekend tournament â€“ the equivalent of 1,200 to 1,500 pitches in as little as three days.â€ Verma said. â€œThis is the opposite of the baseball world, where pitchers receive three to four days of rest before returning to the mound.â€

â€œPrevious studies have shown that shoulder problems cause a significant amount of lost game time among windmill pitchers, with anterior shoulder pain being the common culprit,â€ Verma added. â€œThis study helps explain the etiology of that shoulder pain, and may help doctors devise better treatment and prevention strategies.â€