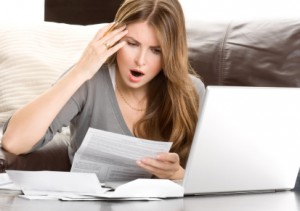 Shannon just received a penalty letter after failing an audit of her physical therapy documentation a few weeks ago.

She shook her head in disbelief as she kept looking at the letter and said:”Where am I going get this kind of money?” Her husband, Mike, looked up from his morning newspaper and saw the dark circles under Shannon’s eyes as testament to her many sleepless nights this month. He wanted to comfort her, but didn’t even know where to begin. This fine only added to their already serious money problems since he lost his job last year. He could not even offer any helpful business advice in spite of his MBA. He felt helpless and powerless as he watched his wife crumble under this new burden.

It all started three weeks ago when Shannon received a notice from Blue Insurance to review the notes for claims that she was paid in 2012. Apparently some of her patients had received inaccurate information due to sloppy accounting and complained, which raised red flags with the insurance company. Next thing she knew, the auditor was knocking on her practice door to inspect all of her physical therapy documentation.

Mike suddenly had an idea:”Why don’t we meet your friend, Ariana, who had to go through an audit last year? Maybe she can give you some pointers on how to deal with this situation.”

Ariana owned a physical therapy practice in the same neighborhood and was happy to meet them for lunch. “I’m so sorry you have to go through this, too, Shannon,” she said compassionately. “Being audited and fined is no walk in the park, but don’t beat yourself up over it. I have learned that the insurance companies come after all PTs because they simply do not want to pay us. In fact, the fewer providers they have to deal with, the better. So they just try to blacklist as many of us as possible.”

Shannon was shocked and relieved at the same time: “What do you mean? Are you saying that anyone can get audited?”

“Pretty much,” Ariana responded. “For insurance companies the audit penalties are pure revenue and they want to grow it as much as possible. Add to that the notoriously high error rates by PTs and it’s a no-brainer for the insurance companies to go after each and every one of us.”

“So audits are pretty much a fact of life,” Mike said flatly. “I just wonder if there is any way Shannon can reduce her error rate so that we still have money for groceries and the electric bill after the next audit,” he added half-jokingly.

What do you think? Can you avoid getting audited,
or is there at least a way to reduce your error rate as PT?

Leave your comments below!

Is your practice ready for a Medicare audit? | The Initial Evaluation Physical Therapy Billing Compliance | Can you afford to fail an audit?
Scroll to top